Healing for Back and Neck Pain

INTENTION: This shamanic healing was done remotely to help relieve Andrew’s acute back and neck pain after he was in a minor boating accident.

HEALING: There was static in Andrew’s energy field, as if he was watching an old tv with no signal. The chaos and noise were nauseating, stuck around his throat and heart chakras, choking him. There was an energetic swelling of his lower body, as the top half of his aura had collapsed and folded in half, leaving his upper body energy empty, like skin and bones. Two of Andrew’s spirit guides came and pulled his aura from the floor, holding it in place. They took a scrubber brush with a long handle, and washed his aura from the inside out with loads of soap and bubbles. He was taken to the ocean and rinsed in beautiful healing waters. Once cleansed, his guides sewed his aura back together with golden luminous threads, leaving only the crown chakra open. He stood on the shore with his head hanging down, loss and grief overtaking him. His spine turned into a tree, the trunk bent over, with moss growing at the top. A silver thread was placed in his crown chakra, flowing down to his root chakra, while an old frayed rope was removed. As the thread was pulled taut, he straightened out like a puppet, standing tall, his crown chakra reconnecting to heaven, his root chakra grounding and aligning him with the earth.

Red smoke came out of his root and navel chakras, causing panic to rise. A flame, contained momentarily, was about to explode. We found him in a past life, where he was working on the lowest level of a ship, in the engine room. A fire had started, and it was his job to extinguish the flames. Two other men were in the room with him, also trying to contain the fire, also in a panic. There was a flash, a moment when he suddenly realized he would not live through this. He also knew he would rather die than suffer the guilt of not being able to properly do his job and being responsible for so many deaths. One of the other men ran up the stairs, screaming for the captain to have everyone jump ship. They knew they would not be listened to.

Andrew was a slave on this ship, beaten down and brainwashed, with an expectation that he would be blamed for anything that went wrong. He knew he could not walk away without suffering the wrath of others, the slave owners who would punish him, or the guilt he would feel and the punishment he would bestow upon himself for jumping ship and saving himself over his people. He stood with the other two men (his wife and son in this life). They all shared the same thoughts. They held hands with their heads hanging down and eyes closed, and waited together.

Three angels appeared, one for each man, and filled their auras with glowing light. They were raised into the stars, infused with higher wisdom and understanding as their spirits were lifted out of the inferno. Andrew was given an elixir of sunlight from a crystal goblet that sent prisms in all directions. The sunlight finally gave him the nourishment he needed, emotionally and physically feeding him. His bones began to heal, weight began to fill the places the starvation had withered. Finally, the static was gone. He opened his eyes and found himself in an underground cave, illuminated by a dim blue light. He walked to the source of the light to find a fire-pit alit with a glowing blue flame. He gathered branches to start feeding the fire.

As Andrew looked around, he realized this cave was unlike any other he had seen before. Lighting a torch from the fire, he walked to the walls and felt bone, with sinewy tendons climbing the walls like vines. He realized that the cave was his internal landscape, with each part of the cave representing his bones, tissues, organs, and glands. Looking up, he saw a bat clinging to a cluster of vines and felt his neck burning. He chased the bat away with his torch and unwound the knots in the vines until the neck pain was resolved. He realized he had let his internal cave become overgrown with his feelings of guilt and helplessness, along with his expectations of being blamed and punished, all of these emotions creating static within so he could not see clearly. With renewed focus and clarity, he walked through the cave, adding fire to the rest of his body until it glowed with a new found strength. 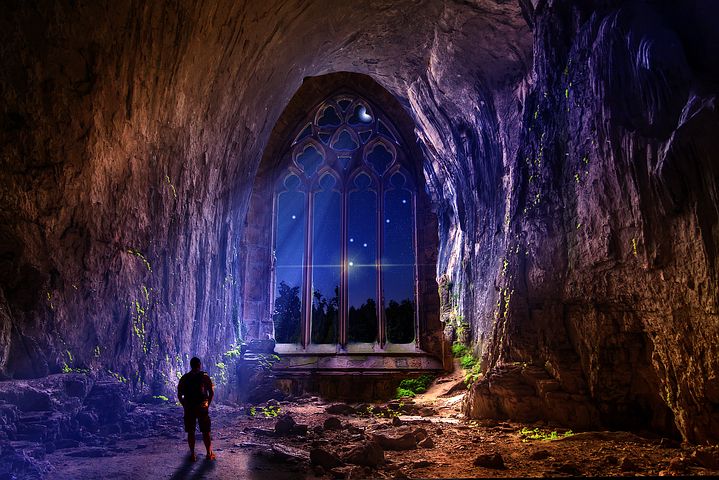